Our Construction Manager Steve Manstone’s heart stopped beating in 2011. To thank the team that saved him he’s been fundraising ever since to fund new equipment.

In November 2011, Steve Manstone had enjoyed a night out at a West End show and an overnight stay in a London hotel, but the next morning he started to feel chest pains and his wife Sue called an ambulance. The paramedics and ambulance crew had to navigate through road closures around the Cenotaph for the Remembrance Day Parade being held that day, but treated him as soon as they arrived and then took him to St Thomas’.

Steve had had a heart attack and as cardiologists prepared him for an operation to open the narrowed arteries and placement of a coronary stent, he had a cardiac arrest. He was successfully resuscitated after four minutes had passed and was so grateful for his care that he has been fundraising for the unit ever since.

Steve has hosted annual golfing tournaments with members of Thames Valley Construction Training Association and has encouraged friends and family to fundraise as well. So far they have raised over £8,000 which has allowed the unit to buy two CPAP machines. These machines help to keep patients’ airways open after a heart attack so they can continue to breathe.

When Steve first starting raising money for the unit, he asked staff how they would like to spend it.

Steve says: ‘I wanted it to be something the staff knew was needed. They told me that one CPAP machine was being shared between three wards – now there is one for each ward.’

Claire Pearson, Deputy Sister on the Coronary Care Unit, explains: ‘Steve had a cardiac arrest right in the middle of the ward. I remember it really clearly – I was the one who resuscitated him’’.

‘Steve is one of those rare people who have kept in touch, which is so lovely. We really appreciate seeing how well he’s doing and it’s been great to meet his grandchildren. To continue to fundraise year after year is phenomenal and has made a real difference to the care we have been able to provide to the patients who came after him.

‘The latest donation to the unit has gone to train more nurses in emergency care skills like resuscitation.’

Steve has been given a clean bill of health and plans to carry on fundraising. ‘I’m so grateful – without the efforts of the staff at St Thomas’ I wouldn’t have seen my daughter get married, celebrate our 30th wedding anniversary, and meet my wonderful grandchildren. I’ve done it simply to say thank you and to give something back. I hope to be able to continue to fundraise in the future’.

There are plenty of ways you can fundraise to say thank you. Find out about all the ways you can support your hospital 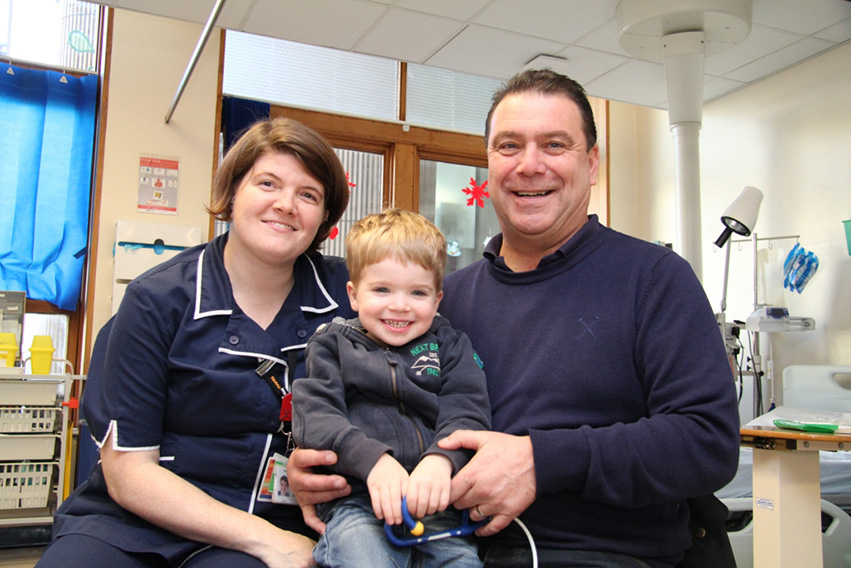